The Lifestyle of a Roman Slave

Roman slaves were an essential element in the lifestyle of the wealthy citizens. Only with slaves could Rome's rich elite have enjoyed such a luxurious daily schedule. Slaves were normally captured in battle and sent back to Rome for selling - they were bought by the highest bidders who were often wealthier members of the public or the government. After the Romans conquered the Mediterranean, slaves constituted 40 per cent of the Italian population.

Abandoned children could also be labelled as slaves and the law even stated that the father of a household could sell their older children if they needed the money. If you did not own land or a business, there was a good chance you would end up becoming a slave.

A wealthy Roman would visit the marketplace to buy their slave(s). Slaves who had their youth and a special trade would usually sell for more money because their age and skills meant they would last for quite a long time. Once a slave was bought, they were their owner’s property for life. The only way to gain their freedom was if their master granted it or they were able to buy it. This was a rare occurrence as the price of a slave’s freedom cost the same as their ownership, which was usually too high an amount for a slave and/or his friends and family to afford. 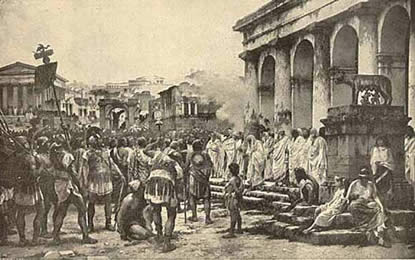 If the slaves ended up marrying and having children, their sons and daughters would automatically become slaves too. Some parents even killed their children rather than have them be brought up as slaves.

Depending on the times, from 20 to 40 per cent per cent of people in Ancient Rome were believed to have been slaves. Rich men could own up to 500 slaves and an emperor would have as many as 20,000 at his disposal.

Not all slaves were treated badly - a good master looked after their prized slave not least because of the difficulty in finding a replacement. It was important for wealthy homeowners to own a good cook, not only for their own daily enjoyment, but also to compete against other elite and rich families on occasions when fine banquets were called for.

However, slaves who had more menial roles working in the mines or labouring with no skills or trade were easily replaceable and therefore not looked after very well. Their lifestyle in the mines also meant their health would suffer and consequently have shorter lifespans.

Many male and female slaves worked out in the fields of rich farm owners. They would begin at dawn and work all day in the sun, and sleep in barracks at night.

Slaves who worked in the homes of wealthy citizens were firstly required to fire up the hypocaust (underfloor heating) if the climate was generally cold. Then once their master or mistress was awake they would be expected to dress them. For the rest of the day a slave’s duties would typically include walking the children to school, cleaning villas, washing clothes, tidying the garden, preparing meals and other household chores. They would also be expected to help dry and dress the family after bathing. Slaves were constantly needed to attend to their master’s different needs - perhaps supplying food and drink during the entertaining of guests, or escorting the guests home by walking ahead of them with a lit torch.

Many slaves also worked in factories or craft shops as weavers, dyers, potters and mosaicists. Some also worked in construction or sold items in their owners' perfume or cloth stores. Sometimes slaves could even work for the government as accountants or guards, or being responsible for chopping wood to heat the Roman baths. A slave with medical skills would be worth somewhere around fifty times that of an agricultural slave.

Depending on how long they lived, slaves were freed when they became much older and became Roman citizens known as freedmen and freedwomen. However the stigma of being an ex-slave in a class-conscious society meant that they were rarely accepted into the middle or upper echelons.

Slavery slowly disappeared from Ancient Rome, not because of any formal decree, but because of economic forces. Roman land-owners in the late empire period had little confidence in the direction of the economy and became reluctant to pay the high upfront fees for slaves, preferring instead to employ low-wage earners that could be let go quickly when they were no longer required.

See also: How was Rome Governed

"The Lifestyle of a Roman Slave". HistoryLearning.com. 2015. Web.