It is widely believed that Mary's execution was the final straw and gave a strong reason for Philip II to commit to the launching of the Spanish Armada.

Elizabeth I and Mary were cousins. In terms of religious faith, Mary was brought up as a strict Catholic. This put her at odds with her cousin. When Mary was just one year old, her father, James V, King of Scotland, died. As a result of this, in 1548, Mary was sent to France for her safety.

At the age of 15, Mary married the king of France, Francis II. While living in France, Mary lived in relative luxury moving between palaces. She was also intelligent, being able to speak, Spanish, Latin French and a little Ancient Greek.

Tragedy struck the young girl. In 6 months she lost three close members of her family, Henry II, he father-in-law, was killed in a jousting accident in 1559. Her mother died in Scotland in 1560 and her husband, Francis, died aged just 16 in 1560.

Mary returned to Scotland as Queen of the Scots aged 18 in 1561.

She married again, in 1565, to Lord Darnley. This proved a very unhappy and unpopular marriage by the Scottish populace. He was incredibly violent and a drunk. During one dinner party, Mary’s secretary, David Rizzio, was stabbed by Lord Darnley and a gang of his friends over 50 times, over blind jealousy.

In October 1565, Mary gave birth to the future king of England and Scotland, James I.

On 9 February 1567, Mary and Darnley were at Kirk O’Field House. In the evening Mary rode off to visit friends. That night, the house was blown up and Darnley’s body was found in the garden. The explosion had not killed him, he was strangled to death.

Three months later, Mary married the Earl of Bothwell. He was just as disliked by the Scots, and they rebelled against Mary. Arresting the queen, Mary was held in Loch Leven Castle.

Forced to give up her throne to her son, James. Mary escaped from prison and fled to England where she hoped her cousin, Elizabeth would keep her safe.

However, Mary represented a threat to real Elizabeth. In England there was relative religious stability, Protestantism, and as Mary was a Catholic, Elizabeth felt she could become a central figure for which English Catholics could rally around.

Elizabeth kept Mary captive in a number of castles and manor houses for 19 years, never meeting with her.

Mary began spreading that she should be queen. In 1570, the pope endorsed her as the rightful queen of England, presenting an additional problem to Elizabeth. Any Catholic person could then carry out an assassination and attempt to put Mary on the throne.

During the Elizabethan period, an efficient spy network had been set up, by Sir Francis Walsingham. This network of spies intercepted two letters between a man called Anthony Babington and Mary implicating them both in a plot to kill Elizabeth. Babington was arrested, charged with treason and executed in September 1586.

Mary was arrested shortly after and put on trial in October 1586.  She was found guilty and sentenced to death in February 1587.

On 8 February 1587, Mary was executed and buried at Fotheringhay Castle. In 1612, her son and king, James I brought her body to Westminster where she was interred in a magnificent tomb. 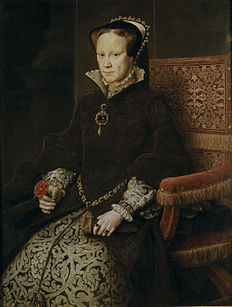