Have you ever been in fog so thick you couldn’t even see your own feet? This was the predicament residents of London’s Isle of Dogs found themselves in in December 1952 when a dense, thick, toxic blanket of smog engulfed the UK capital for five days in what was probably the worst air pollution event in European history. 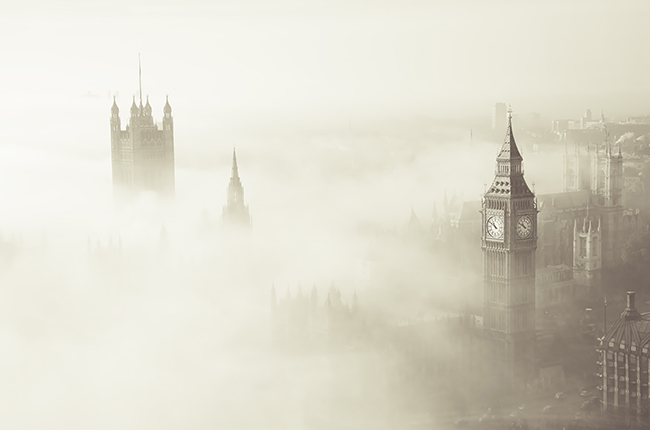 The smog, variously known as the ‘Killer Fog’ and ‘The Great Smog of London’, might have paved the way for major environmental reforms, including the Clean Air Acts of 1956 and 1968, but the destruction it caused was significant: it claimed the lives of as many as 12,000 Londoners, killed animals, caused breathing problems in many and disrupted travel.

And for years researchers, despite knowing that many of the deaths were probably caused by emissions from coal burning, the exact chemical processes that led to the deadly mix of fog and pollution have not been fully understood.

Until now. A research project involving universities from China, the US and the UK claims to have solved the mystery of the Killer Fog.

Their research is published in the current issue of Proceedings of the National Academy of Sciences (PNAS).

On 5 December 1952 London was enveloped by fog. Nothing particularly unusual there. Londoners were well used to having thick mists dropped on them. But this one was of a different scale.

It got worse, bedded in. The sky went black. Visibility in many parts of London was drastically reduced – to three feet in some places. The transport network was grounded. Thousands of people – tens of thousands of people – found it difficult to breathe.

So what have the researchers found out?

To find out what turned the fog into a poisonous one, the scientists recreated the fog in a lab using results from experiments from Beijing and Xi’an, two of China’s most-polluted cities.

“People have known that sulfate was a big contributor to the fog, and sulfuric acid particles were formed from sulfur dioxide released by coal burning for residential use and power plants, and other means,” Renyi Zhang, the lead author of the study and an atmospheric scientist at Texas A&M University, said.

“But how sulfur dioxide was turned into sulfuric acid was unclear. Our results showed that this process was facilitated by nitrogen dioxide, another co-product of coal burning, and occurred initially on natural fog.

“Another key aspect in the conversion of sulfur dioxide to sulfate is that it produces acidic particles, which subsequently inhibits this process. Natural fog contained larger particles of several tens of micrometers in size, and the acid formed was sufficiently diluted. Evaporation of those fog particles then left smaller acidic haze particles that covered the city.”

As well as solving a mystery of the past, the study has the potential to solve a problem of the present: air pollution in China.

There, a similar chemical process occurs often, driven by its massive industrial growth and urbanisation over the past few decades.  While China has worked hard to reduce its air pollution problem, citizens are still often required to wear breathing masks through the day.

“A better understanding of the air chemistry holds the key for development of effective regulatory actions in China,” Zhang said.

“The government has pledged to do all it can to reduce emissions going forward, but it will take time.

“We think we have helped solve the 1952 London fog mystery and also have given China some ideas of how to improve its air quality. Reduction in emissions for nitrogen oxides and ammonia is likely effective in disrupting this sulfate formation process.”